An Engagement in Banff...... the Brazilian Connection

Estella and Anderson had planned to be married the previous year but visas and travel and lack of time made them change their plans.  It was becoming obvious that their families would not all be able to make it for their planned Banff wedding so a delay until the following year became imperative.  And less stressful as well.

So the following year we discussed doing the engagement photos before they flew down to Brazil for their wedding.  Yes, sadly, the wedding was easier to hold in Brazil and taking
me and my cameras in their luggage didn't seem to have a high possibility so we got together at Vermillion Lakes in Banff to create some great images for them to take south with them.  When they said they wanted to do some casually dressed shots and then put on their Brazilian Gaucho outfits, I didn't know what to expect. 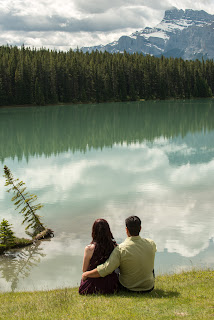 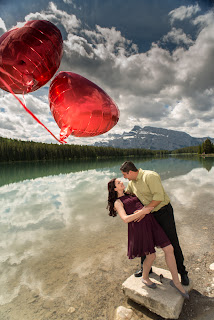 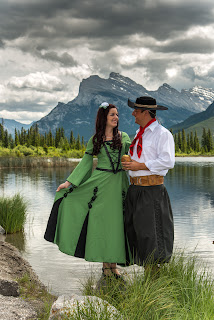 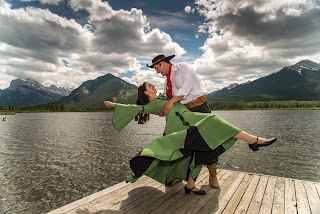 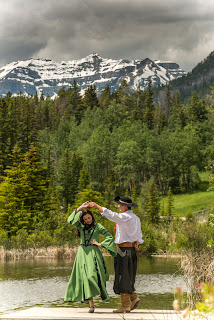 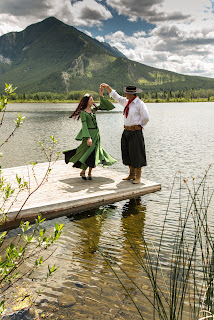 And wow..... what great outfits!  Part of the greatest challenge and joy in my work is the creative aspect.  I have to get to know my clients, get them involved in the process and think of ways to make photographs that reflect the lives of these two people.  Estella and Anderson have immigrated to Canada for education and for their new lives in their adopted country.  But the love of Brazil and their culture will always be strong.  When I saw them standing on the dock I asked them what dances would be part of their wedding day so they showed me.  Now, let me think,  I have 8gb of music on my iPod but no Brazilian music.... hmmmm.... I can move my Miata right beside the dock  and blast some hot salsa music out of a 500 watt amplifier ..... and we are dancing!!!!  Pretty loud music, pretty good time and the pictures were fantastic!  Clients were happy..... and that is my goal.   Something different, something intimate and personal.  And the amazing beauty of the Canadian Rockies in sharp focus.  Job done.